My Babies are Sick!

If there is anything that I hate, it's having sick babies. So, I made an early trip to the market and bought what I needed to make a pot of chicken soup. I serve it up piping hot with crackers or toast and in a few days they will feel as good as new! I wanted to share some photos from my chicken soup session with all of you. I am in the process of making the girls a recipe book, so when I make things I take pictures and type out the recipe to be added to their book. 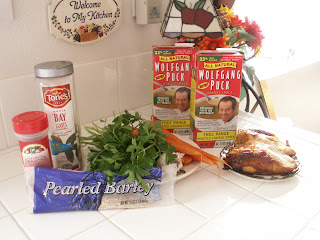 Back in the 'old days', I would make my own chicken stock. BAH! I am so over that, who has the time? Anyway, I use this boxed stock by Wolfgang Puck, it is so flavorful, without being salty. It is rich and delicious, just like what I WOULD make. I put in about 25 cloves of garlic,red pepper flakes, flat leaf parsley, carrots, pearled barley or red potatoes, a bay leaf, 2 chicken breasts with bones. The bones add soooo much flavor. I use breast meat so that the soup isn't greasy. I discard the skin and bones later. We have a wonderful little corner deli that makes delicious grilled chicken breasts, but El Pollo Loco is just fine, too. I boil everything together and in about an hour, we have a meal of chicken soup. When Victoria was a little girl, she called it 'get well soup'. She still does, but don't tell her I told you. Shhh! 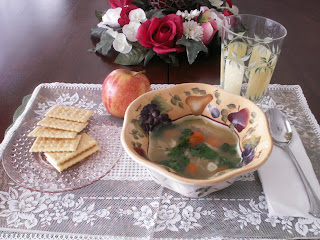