We are a very Patriotic family. When the girls were small, I taught them a lot of Patriotic songs and of course we decorated for all of the flag flying holidays as well. Both my mom and I have rooms decorated in a red, white and blue theme, complete with flags and other memorabilia. We have had and still do have many family members who serve our Country, both male and female, in all branches of service, from Army to Navy to Air Force to Marines. So, taking my own advice from my previous post regarding Memorial Day, I decided that in addition to creating a layout with all of our festivities, family, food and fun, I would create a layout to honor one of my American heroes... 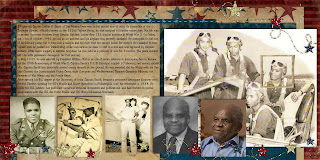 24 year-old Captain Luther H. Smith of Des Moines,Iowa was on his second tour of duty. As a member of the Tuskegee Airmen, officially known as the 332nd Fighter Group, he was assigned to bomber escort duty. His job was to protect American bombers from German fighters. Luther flew 133 combat missions in World War II. On Friday the 13th of October 1944, he had an air accident and his airplane was severely damaged. He attempted to bail out of his burning plane, but it went into a tailspin and his right foot got caught inside the cockpit. He managed to free himself,then he passed out. Parachuting while unconscious, he came to rest in a tree and was captured by German soldiers. After major surgery in German hospitals, he was held as a prisoner of war for 7 months. The plane incident left him with permanent damage to his foot and leg.

In May 1995, he was selected by President William Clinton as one of seven veterans to accompany him to Europe for the 50th Anniversary of World War II. Captain Smith's P-51B displayed number 93 showing two enemy aircraft kills. Captain Smith also destroyed several enemy aircraft on the ground. He was awarded the Air Medal with six Oak Leaf Clusters, the Distinguished Flying Cross, eight European and Mediterranean Theaters Campaign Ribbons, the Prisoner of War Medal and the Purple Heart.

After earning his B.S. degree at the University of Iowa, Captain Smith, became a prominent Aerospace Engineer with General Electric, working for GE's Missile and Space Operations in Philadelphia, until his retirement in 1988. He holds two U.S. patents, has published numerous technical documents and publications, and has worked on special assignments with the U.S. Air Force, NASA, and U.S. Navy Submarine Command.

ETA:Prior to World War Two, the U.S. Army Air Corps did not employ Negroes (the respectful term in that era) in any role, a policy which found its justification in a racist and inaccurate report written in the 1920's. However in 1940, President Franklin D. Roosevelt ordered the Air Corps to build an all-Negro flying unit. The presidential order caused the Army to create the 99th Pursuit Squadron. To develop the Negro pilots needed for the new squadron, the Air Corps opened a new training base in central Alabama, at the Tuskegee Institute...Then came the Tuskegee Airmen.

Captain Smith was part of that squadron of all black pilots. Captain Smith is my Uncle Luther. And the fellow in the second small photo with Uncle Luther is his brother, my Uncle Howard. This was a fun layout to create and I am really glad I took the time to put it together. It will make a nice gift for my uncle and a nice addition to our Family album.

Thanks for dropping in today! Until next time...

Wow Barb..that is amazing...How proud you must be! This is an amazing layout and amazing story! I enjoyed reading it.
Is he still here in Des Moines?
Thanks for sharing this!

Barb, your layout is spectacular! When I saw it and read the journaling, I got chills. Absolutely STUNNING!

Oh my goodness, Barb! I am SO glad you shared this! It is beautiful! I got chills reading the journaling. How proud you and your family must be.

Thank you so much for sharing your uncle's story! I loved reading about this wonderful man. I don't know much about scrapping, but your layout of his photos in a "timeline" looks so neat!

Have a great day!

This is just fabulous Barb!!!

Barb,
I am so thankful that I saw your blog today - this is a wonderful layout and what a beautiful piece of history! No surprise that your family is patriotic!!! I feel proud just reading about a real hero - thank you so much.

Barb, your layout is stunning! The pictures are beautiful and I love the story behind the pictures..so full of history!
You really have it going on girl...super great layout!!!
hugs
Risa:)
p.s. Congratulations to both of your uncles. Both men did an awesome job serving our country and I am truly proud of them!!!

What a beautiful layout to honor such outstanding men. Thank you for sharing this remarkable story of courage.

What an AWESOME story!!! I really love your layout, too! What a wonderful way to honor your Uncle!

I am an Army Brat and LOOOOVE to hear stories like this from other friends! I get all sorts of choked up. We live in the most amazing country... thanks to people like your Uncle!

What a wonderful and touching tribute to your heroic uncle and his patriotism. I loved reading about him and learned so much in the process! Thanks so much for taking the time to create this LO and share his story.

This is an absolutely beautiful layout, both in design and journaling. Thank you so much for sharing.

Barb, this is a wonderful layout and some beautiful pictures! Hats off and a thank you to your two brave uncles.