From our Dancing at Disneyland trip, that is. We had a blast! The girls were so excited about meeting with the choreographer and she was fantastic! She taught them a complete routine from Disney's The Jungle Book. They were given characters to portray and they had to perform their dance routine while staying in character. It was so much fun. Being behind the scenes at Disneyland was a dream come true for me~I love that place~and being able to watch the girls work with a Disney dancer just put me over the moon. After the girls learned the routine, they gave a little performance and unbeknownst to them...they were being filmed for later review by Disney folks. So, they have become part of 'Disney History'. We were so proud of them.

There were no cameras allowed behind the scenes, but I did get a nice group pic of all the girls. I can't post it, because it has OPC-Other People's Children-in it and I need to respect their privacy. Disney also provided us with a photo of all the girls in poses, again, I can't post it for the same reasons. But they look really cute and they had a great time. Each participant received this T-Shirt and they got to meet the man who designed it. How cool is Disney?! 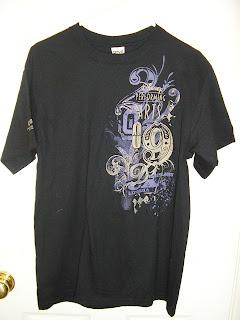 Thanks for dropping in today! Have a fabulous week.

Oh Barb! What an exciting adventure for all of you. It sounds like you all had an awesome time. That shirt is too neat. Wow...just wow!

Welcome home Barb and I'm glad to hear that all of you had a great time while visiting Disney Land!
What a super cool T-shirt....the design is awesome.
hugs
Risa:)