Hello Friends! I hope everyone is doing well. April is just breezing right on by. I am still on break from crafting, but I am not sitting idle. I've been doing many other things, one of which is returning to my former love...baking. When my girls were younger, I baked all the time. But, as life changed, so did I and I was not making time for it anymore. Many of you know that I ADORE cupcakes. I think they are so cute and they are so much fun to eat! But here is my little secret...I have never baked any. *gasp!* I know. I have baked all sorts of cakes, cookies, breads and pies, but never a cupcake. Why? I was intimidated by their smallness. Well, no more! Since this is my year for trying new things, I decided to try my hand at baking cupcakes. I went to the store and bought all new baking gear, then I re-organized the baking center in my kitchen. My goal is to try a new recipe every week until I get bored with it. I've spent a great deal of time collecting recipes on my Hey There, Cupcake board on Pinterest and that is where I found THIS recipe for Lemon Cream Cupcakes. 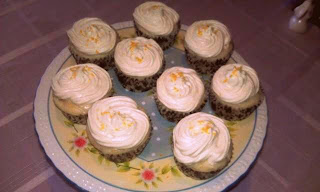 This recipe uses a boxed cake mix. I thought that was interesting and also convenient. I didn't have measure and sift any dry ingredients, which was a real time saver. I used a lot of fresh lemon though and that was yummy and gave the cupcakes a real bright, fresh flavor. My favorite part was the frosting...which was made with cream cheese. It was so flavorful in fact, that I had several tastes without it being on a cupcake. Overall, I think my final product turned out well. Would I make these again? Hmmm...yes and no. I would definitely make the frosting again, but I think I would make the cake from scratch. My family gobbled these up over the weekend. I bake on Friday afternoon. I pack up half of the cupcakes and share them with my neighbors. We only have the desserts in the house for two days. Anything left on Monday, is either frozen or thrown away. We try to eat 'clean' during the week.

That's all I have to share with you today. Have a great week. Thank you for stopping by.

You've never baked a cupcake before?! Well, it looks like you remedied that right up with style and good taste --the lemon paired with a cream cheese frosting sounds heavenly! I'm sure everyone enjoyed them. {I only try to have desserts on hand for the weekends as well...helps to keep the balance.}

Be sure to share your new recipes each week. It's always fun to see what you're up to, as well as to be inspired by new ideas in the kitchen. ;)

Your cupcakes look spectacular! I wish I were your neighbor :). Keep us posted on your baking endeavors.

Yummy! I bet we will see more cupcakes. They sound Nd look great. I love cupcakes!